Last year, I was thrilled to hear that VOYA Magazine — the Voice of Youth Arts publication that serves schools and libraries throughout North America — awarded my debut novel with a coveted Top Shelf honour. They even made comparisons to Narnia and Stephen King!

I’ve been pinging back and forth with the editors about doing a follow-up for quite some time now, and we were finally able to connect for a fun (and surprisingly intimate) interview…just in time for Hallowe’en! A huge thanks has to go out to Stacey Hayman for her support, patience, and a handful of truly original questions: 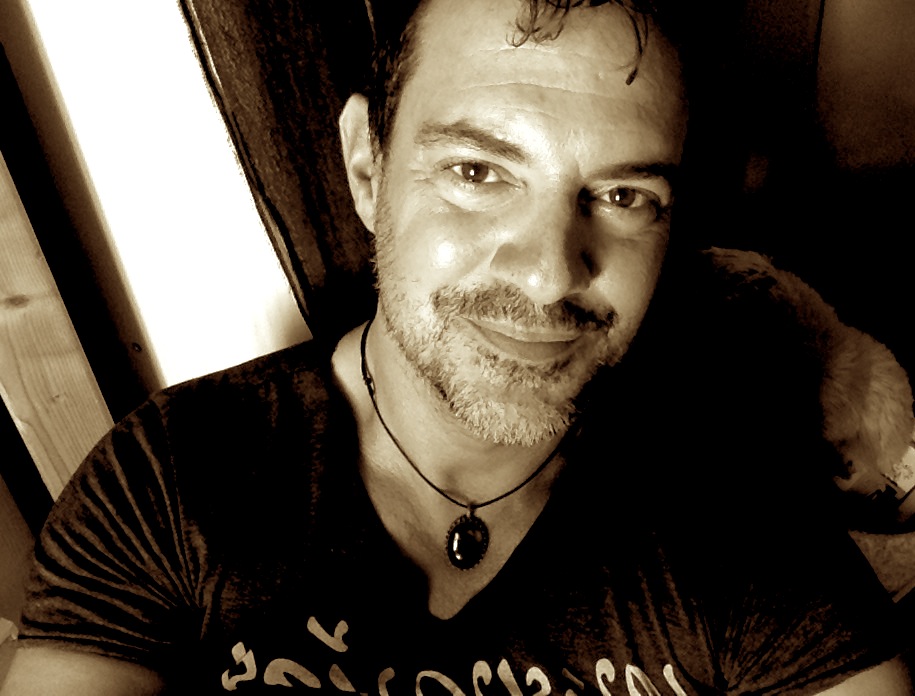 If you’re looking for an author who can meet all of your media needs, consider our current author your lucky find. Brooke Burgess wrote a book, plus directed a team of artists, produced an audiobook, and is making a cutting-edge app or maybe even a videogame version…all from one story! Growing up as an only child in the wilds of eastern Canada, Brooke developed a vivid imagination and a love of scary stories that has served him well in each and every one of his endeavours—from game design and voice direction to comics, movie scripts, and his award-winning debut novel.

If that’s not enough, you can also find (his latest work on) two RPGs: OZ: Broken Kingdom and IRON MAIDEN: Legacy of the Beast, on Apple and Android. Being able to work from almost anywhere, Brooke travels in search of new adventures to share with his growing legion of teen (and feline) fans.

SH: When I was a teenager, people would describe me as a: (jock, band geek, popular, goth, other, none?)

BB: The Dungeons & Dragons geek at the back of the cafeteria . . . who somehow scored a part in the school musical every year.

SH: The best/worst thing that happened to you in high school?

BB: The worst thing . . . well . . . I think it had to be the three or four years of random terror from the tough/jock guys at my school. You see, we lived in a hockey town, so there wasn’t much room for an artsy/nerdy kid (especially a boy) who wore his heart on his sleevThat said? The best thing was being voted Valedictorian by the majority of teachers and students, even though I certainly wasn’t the coolest or smartest at all. It was a sign of respect for somehow surviving my time on the high school battlefield.

BB: BOOK = The Hobbit/Lord of the Rings trilogy, of course.

BAND = I was a secret “metalhead,” so Iron Maiden was the band back then. But once I reached the end of high school, some cool/zen kids introduced me to classic rockers like Led Zeppelin, Pink Floyd, and the Rolling Stones.  Love at first listen.

TV = Oldschool Doctor Who. The first American series of Robotech. And probably my biggest influence — the surreal murder-mystery series Twin Peaks (which gets a third season after twenty-five years next spring!!!)

SH: Is there a story from your childhood that is told most often, either by you *or* about you?

BB: There are more than a few. LOL But I’d have to say that the one that gets bounced around the most, and ended up having a major impact on me . . . It was the summer I got my first pet for my birthday . . . and then I was hit by a car a few weeks later. You can read the whole thing here.

SH: Was there any class in high school you regret paying too little, or too much, attention? If you could add one class to high schools across the country, what would be the topic?

BB: I was way too obsessed with being a math superstar in my early teens. Seriously . . . I look back now, and I see why some kids thought I was an alien. Now, there’s nothing wrong with math — it develops an essential part of your brain for complex problem solving, logic, and reason — but I really wish I had paid more attention to and interest in myart classes. I just got so frustrated because of my clumsiness and impatience, and hated everything I drew, painted, or tried to create. It’s too bad — there’s a lesson in there somewhere about focusing too much on one side of the brain (i.e. math on the left hemisphere) at the expense of the other (art on the right).  That’s probably why I was a late creative bloomer – that artistic side just had to come out sometime.

If I could add one class to schools now? Hmm . . . this might sound weird, but I’d have to say Meditation, but not in some hippie, new-age, pseudo-spiritual kinda way. Instead, have classes that talk about the very real and scientifically proven benefits of “mindfulness” exercises — increased focus, lower stress, better sleep, calmer mind, increased creativity, improved mood, etc. — and then guide students in short (20-30 minute) sessions.  This is something that is beginning to crop up in schools around the country, and those schools have shown incredible improvements in test scores, a decrease in violent incidents, and ratings of overall student well-being. I honestly can’t think of a better way to make a real difference with a single class.

SH: If you could be a character from any book, including your own, who would you want to be? Why?

BB: Do comics count? If so, you gotta say BATMAN. Always be Batman 😉

If not, then my gut says Gandalf for LotR. The Grey AND White versions.

SH: Is there a book, besides your own of course, that you think everyone should be reading?

BB: I can’t believe that I stumbled across The Alchemist by Paulo Coehlo so late in life. It’s a beautiful and inspiring fable about finding  a deeper purpose and direction in life, and it seems to touch almost everyone who reads it. I guess there’s a reason why it’s been on the bestseller lists forever.

SH: Do you have any favorite family traditions that might need some explanation to outsiders looking in? Do you remember how they started?

BB: Nobody has ever asked me this one! Hmmm . . . I would have to say that there were times, especially when I was younger, that the extended family got together during the holidays and dressed up in Victorian-era clothes. Like something out of an old Charles Dickens novel, or even Downton Abbey. I think the idea started with one of my aunts, who felt like Canadians didn’t honor their traditions and history enough . . . so we stole something from the British. LOL

BB: Being INCONSIDERATE/IGNORANT/SELFISH.  This trio seems to work as a posse, and it drives me crazy. I just can’t understand how some people are completely unaware how their actions can affect/hurt others. It’s like we live in a society where everyone else is invisible, and there’s only YOU running around in some messed up videogame, doing whatever you have to do feel Good.

SH: Is there one moment in your life you’d love to live again? To either change it or to enjoy?

BB: I’d love to go back twelve years and relive the day I brought my cat Quinn home from the animal shelter. When she curled up against my chest that first night, I cried like a damn baby. 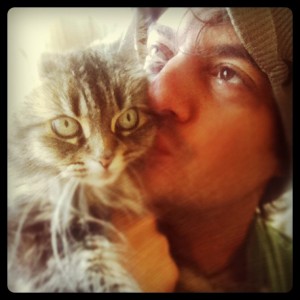 SH: Would you rather go on an adventure with Indiana Jones, Nancy Drew, Star-Lord, or Captain Picard?

BB: Star-Lord! First, he’s in space. Second, his friends are funny and have cool powers. And third, he gets so many girls that maybe a few might notice the weird new guy to his left 😀

SH: When you’re wasting time doing online research, what are some of your favorite places to check out?

BB: If I’m not going to read a science, mythology, or history article on a specific site, then I’m “researching” movies, TV, and game news on sites like Collider, Slashfilm, io9.com, and Kotaku. Oh . . . and you can’t go wrong with CRACKED for badass lists that make you laugh yet somehow leave you feeling wiser after reading them.

SH: You are sitting down to dinner with five people, living or dead, who you find fascinating. Who is at the table and what are you eating?

BB: OMG. I’m sitting at a table with the Buddha, inventor Nikola Tesla, writer/humorist Mark Twain, Bruce Lee, and crazy film director David Lynch!!! Since the Buddha (and Tesla, in his later years) is vegetarian, we’re having a spinach lasagna with garlic bread, a huge Greek salad . . . and probably a few bottles of fine wine to wash it all down.

SH: When asked what you wanted to be when you grew up, what did you say? Were you telling the truth?

BB: I said I wanted to be a fireman, policeman, or doctor.  All the things you were supposed to say when you were a boy back then. But I think there’s at least a bit of truth in what I was saying . . . because I knew on some level that someday I wanted to be in a position to help people.

SH: What did you buy with your first paycheck as An Author? Was it a planned or an impulse purchase?

BB: My first “writing paycheck” was back when I worked on videogames at Electronic Arts. It blew my mind that I could be paid to work in games . . . let alone write for them!  So, it only felt right to buy a new TV and a game system to play on it.

SH: When you sit down to write, what do you need around you? Do you prefer a certain time of day or is it more spontaneous?

BB: I need quiet. I don’t like there being people around, because when I open myself to write I get sensitive — I feel the energy of others, and it clutters my mind. My ideal writing setup is a big desk with lots of working space, a comfy straight-backed chair, power for my laptop, and lots of coffee.

Depending on what I’m writing: I either start around 10 a.m. after some exercise and mental prep and go until 3 p.m.’ish or I have an early dinner and start right after sunset and go until I’m sleepy/distracted. (This works very well for weird and scary stories – the mind censors less late at night.)

SH: Do you have a phrase or motto that inspires you?

BB: A) “Remember – writing is like magic. You’re making magic here.”B) “The best moments are when the words surprise you. C) “If all else fails? I’m sure you’ll be a great barista.”

BB: Happiness = passionate conversations with those I care for that helps them to realize how Amazing they are.

Sadness = that deep, dark, lonely feeling that comes when everyone around you has their walls up.

Scary = That late-night whisper in the back of your skull that says, “Time is running out . . .”

FOR THE REST OF THIS INTERVIEW, PLEASE CLICK TO VISIT VOYA