I tend to be careful when it comes to committing to large-scale game projects, and usually choose to focus on the ‘high concept’ phase at the start of development, or as a ‘script-doctor/narrative-flavour’ mercenary gig near the end. But OZ: Broken Kingdom was special.

I was beckoned on board by the seriously talented and insanely passionate squad at This Game Studio to help craft an original narrative experience from the ground up. Characters. Mythology. Dialogue (a novel’s worth, son). Hoo-boy…the whole magic enchilada.

Our goal was to respectfully draw elements and themes from Baum’s original Oz canon, bring them forward with playful (and dagger-tongued) self-awareness, and pepper the tale with the kind of whimsy that would make the likes of Pratchett and Gaiman proud to swipe.

And now that it’s live, we’re blushing from the tsunami of praise from all corners — more than 100 EDITOR’S CHOICE nods for OZ: Broken Kingdom in Apple and Google Play app stores worldwide!. So get off your thumbs and starting playing — and be sure to let us know what you think. I for one am damn keen to start writing the next volume 😀 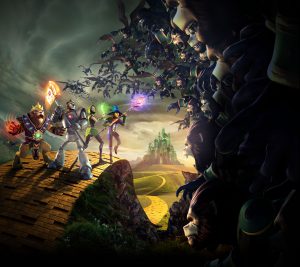 To celebrate the launch of the game and this swanky new site, I wanted to share a little something special with you — my SCRIPT for the intro cinema to the game!

I’ll also include a video embed at the end, so you can see how the wizards (of…Oz?) at TGS brought this baby to life 😀

Ominous MUSIC rises as the LOGO fades in from black…

It was a time of great darkness…

We SMASH-ZOOM THROUGH ‘O’ in TITLE to a ‘magical tunnel’ (our first nod to the importance of the Pool of Wonders.

After an age of fellowship and wonder,

the Kingdom’s peace was about to be broken…

In the tunnel of light, the noble 2D incarnations of our MAIN CHARACTERS (Scarecrow, Lion, Tin Man, Ozma, Polychrome, Glinda, etc) SPEED/PAN/FLASH PAST US.

Its heroes stood powerless, as their legendary friends

from a distant land – the Wizard of Oz, and the beloved Dorothy Gale…

2D art of THE WIZARD (in human form) and DOROTHY zoom/slide into full view – and then VANISH IN A BURST OF DARKNESS.

Snatched from the realm by some dark and terrible magic.

A SHADOW creeps across the map towards EMERALD CITY!

The land was gripped by fear. And that is when it struck…

There’s a BLACK STORM above the main castle. CRACKS have formed in its walls, and glowing shards are falling to the ground.

The great DARKNESS. It came with insatiable hunger,

stabbing at the HEART of the Kingdom’s MAGIC…

GLOWING EYES OPEN IN THE STORM!!!

LIGHTNING FLASH TO: STORM POV OF POOL OF WONDERS

In a single shot, a SHADOW creeps across the emerald courtyard amidst flashes of lightning and thunderclaps. We see the glowing POOL OF WONDERS…and QUEEN OZMA, standing with arms raised by its edge. The waters swirl with light.

OZMA is preparing to cast a spell. Her hands glow, and her face is defiant.

But the Pool of Wonders had a protector. Queen OZMA herself cast the spell,

moving the Pool’s power into the Kingdom’s countless GEMS.

The Pool BURSTS WITH MULTI-COLOURED LIGHT in all directions.

The giant SHADOW DEMON slides into view over EC’s walls. The Emerald walls crackle with power. Shards fall. Lightning bolts in the sky. The SHADOW’S EYES and MOUTH open with menace!

The Darkess faltered, but was not defeated. It screamed in the sky,

vowing that soon, no force in OZ could stop it!

FLASH OF EMERALD LIGHT TO: OZMA REACHING INTO THE POOL!

From directly above, OZMA’s hands hover over the Pool of Wonders. We ZOOM INTO THE POOL, revealing a DARK CITYSCAPE.

That was when the Queen risked everything,

and reached beyond for OZ’s salvation.

MAGICAL FLASH TO: AN OCEAN FREIGHTER ON DARK SEAS.

A WARTORN CITY shows signs of a FIREFIGHT in the distance.

PUSH TOWARDS the freighter.

We can just see a HOODED FIGURE huddling in a covered lifeboat. A LIGHTNING FLASH reveals our heroine — OPHELIA SHEN.

Ophelia Shen never knew her mother. Her father had died in the war.

This world had taken everything from her.

Ophelia in XCU, eyes illuminated by a band of light. We PAN DOWN to reveal her holding her WHITE CAT.

Thunder BOOMS outside. The winds shriek, as if alive. Ophelia looks nervous.

She tried to dream of a better place.

LIGHTNING FLASH TO: OPHELIA PEEKS OUT OF THE BOAT TO SEE…

The freighter is dwarfed by the tempest — a frightening wall of darkness that’s closing fast. The clouds funnel into a towering CYCLONE, sucking everything up in its path. Ophelia’s freighter is doomed.

LIGHTNING FLASH TO: INSIDE THE LIFEBOAT

MCU on Ophelia and cat as scene darkens. We PUSH IN on her desperate face as the storm is upon them!

But somehow, it always found her. So she vowed

to be brave as the darkness came for her,

and made a final promise that in the next world…

She closes her eyes tight — a TEAR falls down her cheek.

…she would fight to make it a brighter one.

The TEAR glows hot as it strikes the dark floor, forming a MAGICAL PORTAL OF LIGHT (another Pool of Wonders link).

This was ironic, considering where she ended up.

OPHELIA stands on an otherworldly BEACH, alive with vibrant colour. She is concerned, as she looks around for something. We PAN RIGHT across this single shot to reveal…

HER CAT COLLAPSED IN A CIRCLE OF GLOWING GEM SHARDS.

Still, it seemed that even this beautiful place

wanted to take something away from her…

CUT TO: OPHELIA SAD AND KNEELING TO TOUCH HER CAT

Her face is shadowed, and more tears begin to fall UNTIL…

…but Ophelia Shen was in LAND OF OZ.

And she would soon learn that here…?

PULL-BACK/PAN UP for an FX-filled money-shot of OPHELIA and the CRYSTAL CAT, revealed in badass glory.

NOTHING is what it seems…

MAGICAL FLASH TO: SOMETHING WAITS IN THE DARK! (WIDE SHOT)

We ZOOM BACK from OPHELIA and the CAT as they stare around in amazement, revealing a winding PATH before them. THORNY BRANCHES slide into view on a layer in the foreground.

…and the Darkness is always close.

GNARLED WITCH HANDS REACH INTO FRAME, ready to pull the branches apart and strike at our them!!!