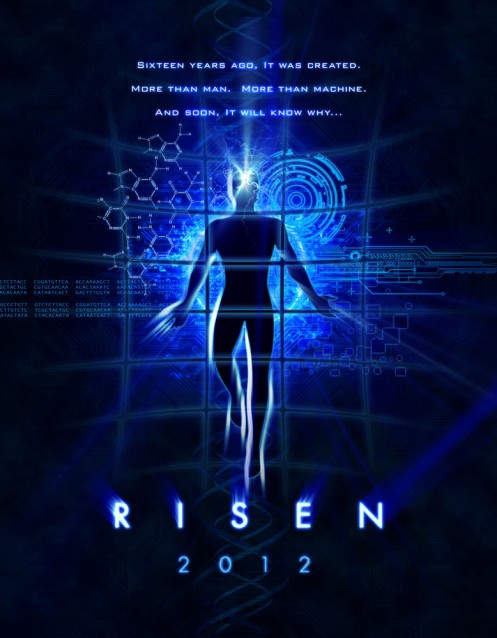 Apologies for the stretch of incommunicado, folks – I blame it on a frenzied mix of travel, research, and project launches – but I wanted to keep you posted on what’s baking in the transmedia oven.

You might’ve noticed a feature I have in development in the PROJECTS section called Risen.  Well, it’s still very much alive;  there’s a third draft of the screenplay nearing completion, a graphic novel ‘package’ with artist attached, and cross-platform strategizing fully in progress.   And now, you can peer behind the proverbial curtain and see some of the lever and pulley action that goes into prepping an original IP for the transmedia stage.

At a remote mountain sanctuary, a disabled orphan receives a revolutionary implant to restore his health.  But when the young man finds himself able to manipulate the digital world with his mind?  Then it’s a race for answers – and for civilization itself – against rogue military, an obsessed scientist, and the terrifying Consciousness awakening within him.

It’s CHRONICLE–meets-THE LAWNMOWER MAN – with a dash sex, religion, and THE INVISIBLES – for the WIFI generation!  Risen introduces us to a crippled orphan (JACOB), who has spent his short life exploring the only world he has ever known – the Internet – thanks to Stephen Hawking-esque eye sensors and panels at this bedside.

Before his 16th birthday, an eccentric scientist (DR BRAHMAN) arrives and informs the boy’s foster family that Jacob will receive of a one-of-a-kind neural implant.  After an intense procedure, Jacob is miraculously walking, talking, and experiencing the physical world for the first time.  But more than this: he can now download data from any computer he encounters wirelessly, directly into his brain.  Soon, Jacob experiences haunting dreams of a God-like being (MAGUS) from the Virtual World.  Shaken by its ominous messages, he runs away with his rebellious foster-sibling EVE, moments before their home explodes in a ball of flame.  The only family Jacob has ever known is destroyed before his eyes…and it’s all because he exists.

A frightened Boy with nothing left, who has been irrevocably transformed…

A troubled Girl at his side, the only guide to a world gone mad…

The greatest Mind imaginable, on the verge of total enlightenment…

And they’ve all got a serious axe to grind.

The world of RISEN hinges upon very real scientific advancements; they infuse the story with big ideas that inevitably lead to our first encounter with Jacob.  The goal of a proposed transmedia strategy is to focus on the fascinating biotech science – AI, DNA manipulation, stem cell research, quantum computing, etc – at the foundation of RISEN’s story-verse.  The rewards are there for committed readers, genre fans, and science geeks alike:

Want to learn more?  Of course you do 🙂