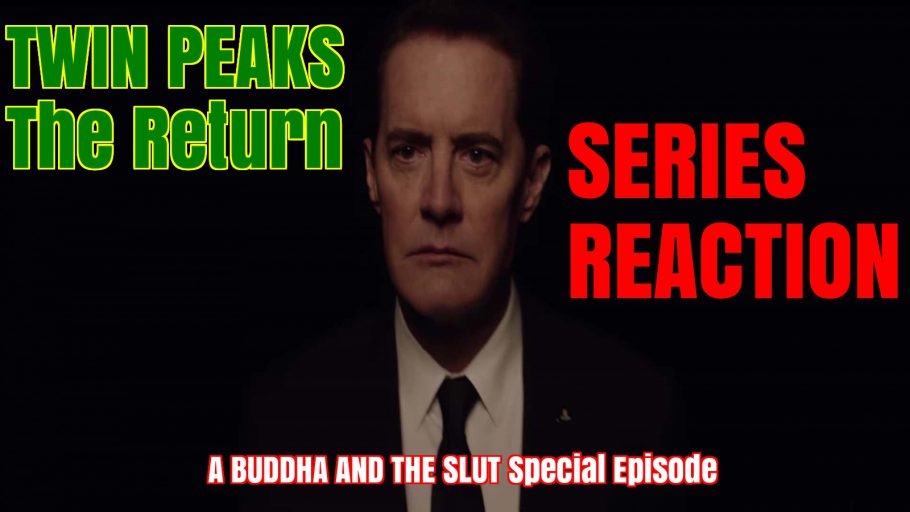 I watched the TWIN PEAKS: The Return finale. I just woke up on the other side of the world Didn’t feed the cat or even have a cup of coffee. And now that it’s over…? There’s no way in Hell (or, apparently, the Black Lodge) I can keep these thoughts to myself. **Youtube RANT embedded above**

You can also Subscribe for the latest stories, rants, and reviews on:

UPDATED: Here’s a theory I shared (audio and transcript) in some Youtube comment that kinda caught fire. It feels ‘right’, and definitely takes some of the sting out. Let me know your thoughts in the comments below, or over on my Youtube channel.

Put simply, in TWIN PEAKS: The Return, I think that the Dale Cooper we knew and loved never left the Black Lodge.

This scenario is akin to comic writer Grant Morrison’s ‘Omega Sanction’ or Doctor Who’s ‘ultimate prison’ or, more fittingly (and in line with Lynch’s beliefs) the Tibetan concept of the BARDO: the realm of the Dead. Hawk foreshadowed in Season 2 that the confrontation with the Shadow Self could ‘utterly annihilate the soul’ in the Black Lodge. We know from history that Cooper ‘lost’ this battle, because he entered the Lodge with ‘imperfect courage’ (IE: trading his soul for Annie’s out of fear and attachment VS seeing the truth of the Oneness of all things).

So then…why would the Lodge let him out?

In the Bardo realm, the soul encounters countless illusions to burn away Karma and force the soul to confront its sins and mistakes in myriad realities. TWIN PEAKS: The Return is ONE of these false realities—with Cooper splitting himself into two halves, compassion and Will, and undergoing a spirit quest to reunite his halves and ‘save the girl’ (Annie, or Laura, or Audrey…it doesn’t matter, because they will all result in failure until their souls choose to save themselves). He even gets glimpses of otherworldly Benevolence — the Giant/Fireman, who warns him of the path he is on, the signs to look for, and that he is ‘far away’ IE: still trapped in a loop of fractured selves — but afforded a moment of peace and awareness to breathe and reflect.

Just like the Tibetan Book of the Dead speaks of, it’s an experience of Heaven and Hell and Limbo realms— over and over, again and again and again—but all of them ILLUSIONS. Manifestations of one’s own Karma, where the soul witnesses events like they’re watching a play unfold, with characters that are essentially aspects and reflections of his/her own soul and memories. In fact, the soul becomes so enamoured with and attached to these illusions that it eventually gets sucked into (and lost within) the looping Drama itself.

Then we hear Cooper’s distorted voice as the face watches, unblinking: ‘We Live Inside a Dream‘.

This is HIS dream of escape from—and of ‘victory’ over—his spiritual prison.

To punctuate this, his dear friend DIANE materializes, sporting a crimson-fringed wig (the drapes) and black and white nail polish (the chevron floor). He succumbs to a moment of attachment and desire—the passionate kiss—which then triggers the start of the real Mission: Save Laura.

The scene darkens, but the overlay of REAL Cooper is still witnessing, watching silent and helpless as ‘Cooper’, Diane, and Cole emerge from the darkness and approach the magical humming door beneath the Great Northern. Cooper’s room key—a relic from the original series and intimately tied to his past failure—opens the door. MIKE appears. He whisks Cooper through the Convenience Store portal (now conveniently Woodsmen-free), failing to notice the JUMPING MAN—a known Lodge Spirit from Jeffries’ ‘dream’ in FWWM who screeched with malevolence—pass them on the stairway.

They enter the room of the all-seeing OZ (Teapot Jeffries) who teases a point on the closed loop of infinity where Cooper will be transported to. Cooper appears to land in the past, on the night of Laura’s murder, and attempts to change her fate. But he loses her, and ends up back in the Lodge.

This is where he re-experiences the moments from Episode 1. The Lodge version of Leland—a proven liar from the original finale (‘I did not kill anybody’)—tells him to ‘find Laura’. Soon after, Laura whispers something troubling to Cooper, screams an unearthly scream, and is yanked from the Lodge.

So Cooper pursues again. And again. And AGAIN. Because this is been happening for 25 years.

It’s been happening since his first breach of the Lodge at the end of Twin Peaks Season 2. It was there, after the failed duel with his Shadow Self, that he was cursed to ‘NON-EXISTENCE’ . The core elements of this drama have likely played out in countless ways over the past two and a half decades. Each loop would feature a version of ‘reality’ with different characters and choices and key moments of conflict, triumph, and setback. But they would all lead to the inevitable conclusion…

So, with that, I believe that Laura’s final scream—the one that extinguished the lights of her childhood home in a burst of electric fire—collapses this reality, and hits the reset button on Coop’s loop. Hmm…it’s as if Frost finally got around to reading Stephen King’s The Dark Tower before taking a stab at the TWIN PEAKS: The Return script.

And what do we see (and hear) after that final, soul-crushing darkness?

We see the real Cooper sitting in the Black Lodge. In the spot he never actually left.

Laura Palmer—or someone who looks exactly like her—is whispering in his ear.

There’s a loop of music playing in reverse.

Cooper’s expression is confused…haunted…maybe even tortured.

Like he has just awakened from a terrible dream.

And ‘Laura’ is there to greet him. She leans in, and tells his the truth:

“You were dreaming. You never left this place. And you can never save me…

…until you save yourself.”

Is is past, or is it future?

It’s an eternal prison, until we understand the truth.