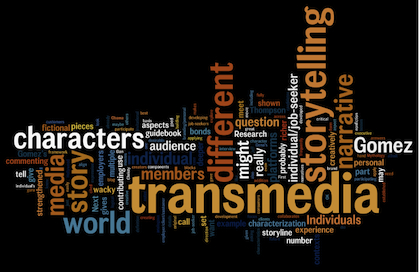 Welcome to the inaugural instalment of what I hope will be a bi-weekly feature here on the revamped blog: TCS (Transmedia Case Study).  The plan is to examine the presence/branding of various major media properties, and how they’ve fared in their attempts to tap into the brave new world of modern narrative and promotion.  But before diving into our first case study in the post to follow, I think we need a quick primer…

Transmedia seems to have become the go-to term for what has been an evolving label since the internet content explosion of the late 90s.  In realizing the potential for the Web to leverage traditional entertainment IPs beyond the limits of their original representation (ie: book, TV, film, comic, etc), buzz-word lovers have burned through a host of potential monikers.  Multi-media.  Cross-media.  Cross-platform.   But they were all trying to express the same concept:  telling some form of ‘story’ across more than one medium.

It’s a cool concept, for sure…but why all the naming fuzziness?  The questions and confusion?  Why don’t people – specifically content producers and studios – seem to grasp what it is, and how to harness the damn thing to its full potential?  For me, the key to understanding a paradigm-busting concept depends primarily on how one can visualize it. If you have an accurate representation – or a clever metaphor/analogy – of what something is, creative AND business types can grasp it on more completely from their respective sides of the production equation.

There have been lots of attempts to do this.  Webs.  Venn diagrams.  Branching ‘trees’.  Intense ‘Wheel and Spoke’ structures.  Not inherently ‘bad’ models.  But I believe they’re missing the essential point.  By having the Original Property (OP) as an external thing – the hub of the wheel, the head of the octopus, etc – and the other expressions as extensions of it, you fall into the trap of building a creative hierarchy.  The extensions become slaves to the OP. It’s kinda like special features on a DVD/Blu movie – an amusing distraction, at best – or akin to stapling rough sketches and artist notes to the frame of the Mona Lisa, at worst.

But for me?  I’ve always thought that if transmedia should ‘look like’ anything, it should be this:

With this model, the underlying CONCEPT is the raw gemstone itself, and the facets that are carved from it become the various REPRESENTATIONS of said concept.   Some facets will naturally be larger, and have more prominence.  Others will be more supportive, incidentally decorative, or structural in nature.  But, when scrutinized in the light, they ALL sparkle and shine – greater than the sum of their parts – reflecting the stone’s true quality and nature from all angles.

This is the beauty of transmedia:  showcasing the original idea from multiple angles, but never straying from its IDENTITY.

Which is the whole point of branding in the first place, right?